On his father's death he became a board member and co-proprietor of his father's business, the Otto-Wolff-Konzern.[1] In 1942, during World War II, he was sent to Portugal to handle import-export business for the firm.[1] He was briefly interned following the Allied invasion of Germany but was given responsibility for re-establishing the company's export business in 1947.[2]

On the 1966 flotation of the business, Wolff von Amerongen became Chairman of the board, a position he retained for the next twenty years, taking on Peter Jungen as a P.A.

He held positions on the boards of other major firms. In 1971 he became a director of Standard Oil of New Jersey, later Exxon.[3]

He was a member of the Bilderberg Advisory Committee and Bilderberg Steering Committee. His long term personal assistant, Peter Jungen, attended Le Cercle. 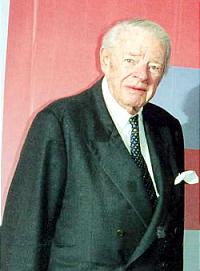