Gianni Agnelli was a highly influential Italian industrialist and principal shareholder of Fiat. He a member of the Bilderberg Steering committee, as was his younger brother Umberto Agnelli. Agnelli was the most important figure in Italian economy, the symbol of capitalism throughout the second half of 20th century, and regarded by many as the true "King of Italy".[citation needed]

His grandfather Giovanni Agnelli started the Fiat car company, which became the biggest company in Italy. He was succeeded by Giannis' father, Edoardo Agnelli. Gianni – as he was known to differentiate from his grandfather, with whom he shared his first name – inherited the command of Fiat and the Agnelli family assets in general in 1966. Amongst other changes, Gianni diversified the company to include military industry.

Gianni joined a tank regiment in June 1940 when Italy entered World War II on the side of the Axis powers. He fought as a volunteer on the Eastern Front, being wounded twice.

After Italy surrendered, due to his fluency in English, Gianni Agnelli became a liaison officer with the occupying American troops. His grandfather, who had manufactured vehicles for the Fascist regime during the war, was forced to retire from Fiat.

Agnelli was named senator for life in 1991 and subscribed to the independent parliamentary group; he was later named a member of the senate's defence commission.

Some of the other Bilderberg regulars became his close friends, among them Henry Kissinger. Another longtime associate was David Rockefeller, who appointed him to the International Advisory Committee (IAC) of Chase Manhattan Bank, of which Rockefeller was chairman; Agnelli sat on this committee for thirty years.

He was a member of the P2 lodge, the center of the Italian deep state.[1]

Gianni Agnelli admitted that he had financed the lodge of Lino Salvini, which was mentioned in the investigation of the Borghese coup and investigated for the murder of judge Occorsio and involvement Italicus terrorist attack, a part of the Years of Lead in 1970's Italy. 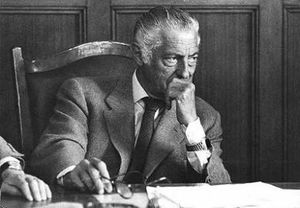