The Charlie Hebdo shooting occurred on 7 January 2015 when two masked gunmen forced their way into the offices of that satirical newspaper in Paris, France. They shot and killed twelve people before escaping. Another four attacks occurred across the Île-de-France region in the next two days, killing five more people and wounding 22 others. Three of the gunmen as well as four hostages were killed in the 10 January 2015 denouement.[1] A fourth suspected perpetrator is still on the run.[2]

The commercially-controlled media generally assigns responsibility for the attacks to "Islamic Terrorists" who were avenging the Prophet Mohammed and shouted "Allahu akbar". The attackers made a single fatal mistake: They left an ID card in their abandoned getaway car.[3] Hamyd Mourad, the 18-year-old brother-in-law of Chérif Kouachi was accused of driving the car, but turned himself in and he was released after many classmates testified he was in school at the time.[4][5]

It seems unlikely that such apparently well trained mean would even take an ID card, far less leave it in the getaway car. This is suggestive of what Russ Baker referred to as the Lost and Found ID syndrome:- planted evidence such as the passport of Satam al-Suqami, supposed 9/11 hijacker, which authorities still claim was recovered undamaged by the plane's impact and fireball.

Links to security agencies have been reported, among them CIA asset Abu Hamza, a key contact to the alleged 9/11 hijackers.[7] The Paris shooting suspects were no strangers to the French government and its intelligence agencies. Strange then that Kouachi and his brother would then be reported to have traveled to the Middle East to receive training from Al Qaeda, then to have fought in Syria in a war backed in part by France, before returning home and carrying out this most recent terror attack, all while being tracked by French intelligence and the American "no-fly" list.[8] [9] [10] [11] [12] 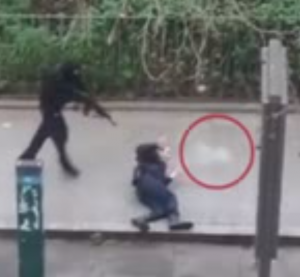 A frame from a video purporting to show someone being shot in the head, but which appears to show a bullet hitting the pavement in front of him

The commercially-controlled media has played a section of video claiming it shows a terrorist shooting a prone policeman in the head, yet this does not appear to be the case.[13] Rather than provide any explanation, the video has been repeatedly taken down from the internet.[14] 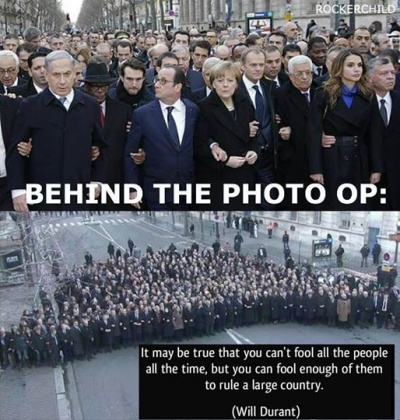 The commercially-controlled media reaction appeared slickly coordinated - a pattern commonly observed in recent deep events - attributing intelligence agencies' failure to act to either stupidity or lack of resources.[16] Investigative journalists such as Tony Gosling have suggested that the corporate media was suggestive of a well orchestrated psyop.[15]

The President of Turkey, Recep Tayyip Erdoğan has publicly suggested that it may have been a false flag attack organised either by the CIA or the Mossad.[17]

Umberto Pascali argues the men dressed in special forces attire were in fact carrying out a non orthodox warfare operation to prevent further rapprochement of France, Germany and Russia. The January 15 summit in Kazakhstan could have put an end to the artificial split between Europe and Russia which goes against their own and their peoples' economic and strategic interests. In fact, on Jan. 11, 2015 - the day after the operation - German Chancellor Merkel uttered that she is not ready for a meeting with French, Russian and Ukrainian leaders aimed at finally putting an end to the war in east Ukraine.[18]

After U.S. authorities disproportionally sanctionedBanque Nationale de Paris the French government had openly questioned the petrodollar hegemony. French finance minister Michel Sapin suggested that Europe trade in euros internally and that euro zone finance ministers would discuss ways of boosting use of the euro in international trade.[19] Christian Noyer, head of the french central bank, planned to abandon the dollar as its sole reserve currency and suggests that "moving towards a diversification in reserve currencies in international trade is inevitable." [20] Christophe de Margerie CEO of energy gigant Totale is quoted by saying "There is no reason to pay for oil in dollars."[21] and "Nothing prevents anyone from paying for oil in euros."[22] Other French business leaders expressed similar frustration about the punishment of BNP, hinting at "judicial risks involved in dollar transactions."[23]

France also has a military joint venture with Russia.[24] These may have been construed as signs of a dangerously independent approach to policy making.

Russian president Putin is aware that France is blackmailed: "We are aware of the pressure our American partners are putting on France to force it not to supply Mistrals to Russia. We even know that they hinted that if France does not deliver the Mistrals, the sanctions will be quietly lifted from their banks, or at least they will be significantly minimised. What is this if not blackmail?" [25]

The real target — beyond the men and women who were cynically slaughtered, often under the eyes of the camera – is the population. To terrorize the population and to blackmail the leadership of a country. The message for the government is: You are not able to defend your people, we have taken over; now you have to accept our conditions![26]

To push for war with Russia and prevent Eurasia from coming together is one of the last options available to those who fear "loosing the big game", according to Pascali.

A persuasive article by Adrian Salbuchi makes a wide ranging and compelling case for the essentially false flag nature the event in furtherance of the a relentless Globalist agenda. It was first published on 14 January, about 1 week after the event.

Just as with the 7/7 bombings, political leaders in several European nations quickly moved to use the shooting to call for a tightening of police state measures including databases to monitor travel in and out of Europe[27], internet surveillance and curtailing of free speech, under the same banner of the "war on terror".

Cancellation of the peace summit

A peace summit for Ukraine had been planned for Jan 15, 2015 by French, Russian and Ukrainian leaders. It was was cancelled by both Merkel and Hollande.

Joint Statement of European Ministers of the Interior

The next day, the European Ministers of the Interior arrived at the following agreement, as noted in the presence of Dimitris Avramopoulos (European Commissioner for Migration and Home Affairs, Eric H. Holder (Attorney General of the United States ), Alejandro Mayorkas (US Deputy Secretary of Homeland Security), Steven Blaney (Minister of Public Safety of Canada, and Gilles de Kerchove (European Counter-Terrorism Coordinator).[28]

On Jan 12th, it was reported that François Hollande, French President was preparing a French version of the Patriot Act.[29] Less than a week after mass rallies in favour of freedom of speech, the French government carried out a mass censorship, arresting dozens of people under charges of "defending terrorism" for expressing opinions they took exception to. These included a 16 year old for an ironic comment, and the comedian Dieudonné M'bala M'bala for posting to his Facebook page: "Je me sens Charlie Coulibaly" ("I feel like Charlie Coulibaly").[30][31][32] In February, the French government claimed sweeping new powers to carry out internet censorship at will.[33] In March, it was announced that France would keep 10,000 troops on the streets of France, ostensibly because of the high risk of terrorism.[34]

In Germany, removal of all limits to mass surveillance of the internet and of flight data was first mooted by minister of the interior Thomas de Maizière, then followed by Merkel and other politicians.[35] Others see the opportunity to sell more German weapons to "Kurds fighting islamists".[36] Right wing party leader Prof. Dr. Jörn Kruse (AFD) is caught on camera saying the "attack happened much earlier than I have hoped for... or better say: as I expected." The audience shouted and cheered.[37]

UK and the US have used the event as a pretext for "increasing co-operation" as regards internet surveillance.[38] The head of MI5, Andrew Parker said that he needed new powers and warned "We know that a group of core al Qaeda terrorists in Syria is planning mass casualty attacks against the West."[39][40]

Following the shootings, Sir Bernard Hogan-Howe, the Metropolitan police commissioner has suggested that commercially-controlled media consider not broadcasting live images of terrorist attacks. He explained that this would hamper police response, stating "We do have plans already but we have reviewed and refined them, in consequence of what we’ve discovered of the French experience, and also the way that we work with the press... when the police and the security service and sometimes the military respond, we want to make sure that our ability to respond is not restricted by things like live coverage. We have ongoing discussions with the media about how that happens."[41]

Italian Prime minister Matteo Renzi and the Liberal and Democrat Group have both suggested initiating a new pan-European intelligence agency, to go alongside the six that already exist: Europol, Frontex, the Intelligence Analysis Center, the Satellite Center, the Intelligence Directorate and the Situation Room.[42][43]