Destruction of evidence, a crime in many jurisdictions, is the erasure or removal of evidence pertaining to a crime scene. It is a staple tactic of the cover-up of deep events.

Deep state groups are well placed to arrange for government documents to go missing, especially if governments regularly resort to "national security" to obscure their processes. This has been a repeated feature of VIPaedophile investigations. It can be hard to determine deliberate document destruction from accidental misplacement. Is it merely coincidence that shortly after George H. W. Bush became US Vice President, the SEC reportedly lost its records of the filings of Zapata Petroleum from 1960-1966?[1]

Using one deep event to hide another

The US deep state has been adept at using deep events not only to distract and mislead, but also to destroy ongoing investigations of other deep events.

Structural deep events are generally so large that their cover-up is a major operation for the deep state. Destruction of evidence is the rule, not the exception in this case.

The limousine of the JFK motorcade was quickly washed.[citation needed] Dozens of people died suspicious deaths relating to the JFK assassination, most notably the patsy, Lee Harvey Oswald. C. D. Jackson, a covert CIA operative, bought the Zapruder film and declined to show any of it to the US public until 1975. Its integrity is a subject of dispute.

On the morning after the MLK Assassination, someone[Who?] from the Memphis Public Works department ordered the cutting down of a row of bushes below the balcony on which MLK was shot.[2]

In 1973, outgoing CIA Director Richard Helms ordered the destruction of all documents regarding the agency's illegal mind control research project, MK Ultra. This destruction was only partly successful; one box of around 20,000 accounting documents had been misplaced and was discovered in 1975.

"What happened inside the buildings of the World Trade on September 11 is difficult, but not impossible to discern. The government has put a seal on the testimony gathered by the investigating 911 Commission, and instructed government employees to not speak on the matter or suffer severe penalties, but there are a number of personal testimonies posted on the Internet as to what happened in those buildings that day. Careful reconstruction from those testimonies indicates the deliberate destruction of evidence not only by a targeted assault on the buildings, but also by targeted fires and explosions."[3] The most obvious case of destruction of evidence was the swift cleanup of the remains of the World Trade Center, which the government never tested for chemical residues of explosives.

The remains of the World Trade Center were shipped off for recycling. The speed and security surrounding this operation may be explained by the fact that researchers including Niels Harrit analysed dust samples from the day and found it to contain unexploded (and unexplained) traces of nanothermite. 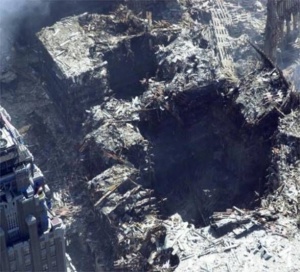 The dramatic hole in the middle of WTC6.

World Trade Center 6 was bombed at 9:04 a.m. on 9-11.[4] It housed various US government agencies, including the Export-Import Bank of the United States and the The El Dorado Task force, which coordinated all major money laundering investigations in the U.S. Its bombing would have allowed for the dropping of many ongoing investigations.

World Trade Center building 7 was destroyed on 9-11. Exactly what documents this building contained may never be publicly known. What is known, however, is that it was Rudy Giuliani's emergency management center, and housed numerous secretive parts of the US national security state such as offices of the US Secret service and the largest CIA station outside of Langley Virginia.[5]

The 9-11 attack targeted the recently reinforced E-wing of the Pentagon that housed the ONI, where many budget analysts were investigating how MICC's accounting practices which had allowed, according to Donald Rumsfeld's admission on the day before, for some $2.3 trillion to go "unaccounted for".[6]

Third party CCTV footage of the event at the US Pentagon was quickly confiscated.

The SEC, after reportedly investigating the suspicious stock puts relating to 9-11, not only failed to prosecute anyone but took the highly unusual step of destroying all documents.[7]