"Since Corbyn became Labour leader, there has been a demise around which some speculation swirls. His good friend Michael Meacher, MP for Oldham West and Royton, who had appeared in robust health, died unexpectedly after a short illness the details of which have never been disclosed. Meacher once wrote a cogent analysis of the questions surrounding the 9/11 attacks[2] and reportedly had been lately taking renewed interest in the matter."[3]

The online journal Veterans Today said that when Meacher broke ranks with the liars and traitors back in 2003, and came out for 9/11 truth in the pages of The Guardian, the Deep State panicked – and Meacher was targeted for vilification and threats.[4] 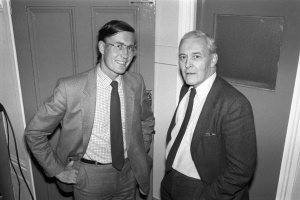 Michael Meacher was on the party’s left throughout his long career, though this did not prevent him serving as a junior minister in the late 1970s. After 1979, when Tony Benn was running a campaign to pull the Labour Party to the left, and had his sights on the party leadership, Meacher was so important to the cause that he was awarded the nickname ‘Benn’s vicar on earth’. In 1983, he ran unsuccessfully for the deputy leadership as the left’s standard bearer, while Benn was temporarily out of Parliament.

Though he was beaten in that contest by Roy Hattersley, Meacher’s prominence secured him a place on Labour’s shadow cabinet, which in those days was elected by Labour MPs. He was re-elected every year from 1983 to 1996, an indication that he was more popular among fellow MPs than with successive party leaders.

Neil Kinnock was obliged to give him a senior job, but in 1988 removed him from the politically sensitive post as shadow employment secretary, to bring in the younger and more junior Tony Blair. In 1997, Meacher’s status as the longest serving member of the shadow cabinet should, under party rules, have guaranteed him a job in the first Labour cabinet, but Tony Blair ignored the rules and made him a middle ranking environment minister instead.

Despite the humiliation, Meacher refused to resign even when his position as a minister obliged him to go through the motions of supporting the Iraq War. He was sacked in June 2003. His re-election in May 2015 made him, at the age of 75, one of the four longest serving MPs in the Commons.

In July, as a Corbyn victory loomed, Meacher wrote: “The arrogance and intolerance of the Blairites is breathtaking. Faced with the prospect of a runaway victory for Jeremy Corbyn who has come from repudiated outsider to front-runner in scarcely more than a month, their sole response is to prepare a coup against Corbyn if he is elected.”[5]

Towards the end of his 45-year parliamentary career, Michael Meacher was outspoken about the Bilderberg group, and after their meeting in Watford in 2013, he proposed a private members bill demanding a report on the meeting from each of the UK participants.[6]

In response to Meacher's 2012 article "What is Cameron hiding over Megrahi?"[7], former diplomat and Lockerbie campaigner Patrick Haseldine wrote suggesting "David Cameron has a secret about Lockerbie"[8]

Twenty four years earlier, answering a question put by the same Patrick Haseldine, Meacher spoke strongly in support of imposing economic sanctions against apartheid South Africa on BBC Question Time on 25 February 1988 and, when chairman Sir Robin Day called for a show of hands, 60% of the studio audience voted in favour.[9]

Tony Gosling notes that Michael Meacher was a firm opponent of the "War On Terror" and that his Twitter account was summarily deleted.[6][11]