From Wikispooks
< War on Terror
Jump to navigation Jump to search

The purposes of the "war on terror" are cloaked by a deceitful official narrative which refuses to define "terrorism".[1] This page summarises some of the real purposes of the fraud, looking at related third rail issues such as false flag attacks.[2].

It's all about keeping citizens safe by deterring evil "terrorists" from future attacks and foiling their wicked schemes. Citizens should rest easy that the de facto rollbacks of civil liberties listed below are only temporary and will be reversed in perhaps 40-50 years' time[3] when the danger is past.

Another perspective notes firstly that traffic accidents kill hundreds of times more people than "terrorists", to say nothing of cancer or pollution, which kill millions every year and pose an existential threat to humankind.[4] Evidence suggests that the largest and most spectacular attacks (such as 9/11 or 9/99) are in reality false flag attacks, which NATO is known to have staged in the past (for example Operation Gladio). CIA-connected spooks were selling bomb-making equipment & training on a massive scale to Libya even as they held a 1979 conference to promote the narrative of terrorism. This perspective suggests that the "war on terror" is a no mere project of self-enrichment by unscrupulous companies and individuals, but a subterfuge being used to move society towards a totalitarian police state.

Deep State groups are using the fear associated with the "war on terror" to justify censoring information rather than trying to explain the discrepancies between the official narrative and the observable (and now, with modern communication technology, also easily broadcastable) real world. For example, the UK government, in 2014 was seeking to ban web content that - although legal - it deemed "unsavoury".[5] In USA, FOIA requests have become become more or less useless due to exemptions made for "national security". "Extremist" information is deemed to have the capacity to "radicalize" people, turning them into "extremists", who by the UK government definition are anathema to UK values. 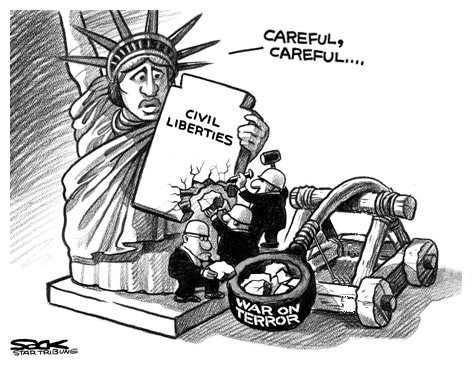 The "war on terror" is used as a pretext for rolling back civil liberties[6] including habeas corpus, the freedom from unlawful search and seizure or the absolute ban on torture. Real debate about the efficacy of such laws is unknown in the commercially-controlled media; instead, the pattern for Western governments is to drafted legislation in vague legal terms, present it as something which is urgently required to stem the enemy du jour (i.e. ISIS or Al Qaeda). Once passed, the laws are used to threaten peace activists (and anyone else who questions the "war on terror"), rebranding them as a "domestic terrorist" with "extremist" views.[7][8]

After the Edward Snowden Affair, widespread mass surveillance by the NSA and other government agencies is widely known to have been carried out illegally for years. There is no serious discussion in the commercially-controlled media of legal proceedings against the perpetrators, and in the context of the "war on terror" the implication is made that any such actions would be prejudicial to "national security", and that it motivates mass surveillance.[9]

As of 2018, none of the 5 eyes nations had signed the 2006 International Convention against Forced Disappearance. Under cover of the "War on Terror" rhetoric, and in contravention of international human rights law, many national governments have been engaging in (and even attempting to legalize) the forced disappearance of their own citizens, or other other "terrorist suspects" within (or particularly in the case of the US also outside) their borders. 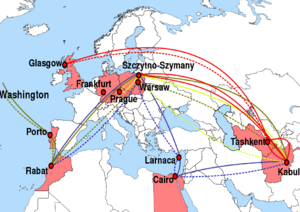 Extraordinary Rendition flights by the CIA, as reported by Rzeczpospolita[10]

In fact far from extraordinary, what the commercially-controlled media refer to as "extraordinary rendition" is used increasingly commonly under the "War on Terror" rhetoric. It is basically the forced deportation of a victim from one legal jurisdiction into another, e.g. to circumvent legal obstacles to their torture.

In Italy, Operation Gladio was a campaign of false flag terror that was used to try to discredit the political 'left' (communism in particular). The "war on terror" serves a similar purpose of exerting a constant stress on the subject population, potentially making them more afraid and compliant - unless of course they take can understand the "Big Lie" and respond accordingly.[11][12]

The commercially-controlled media have repeatedly invoked the bogus "ticking time bomb" scenario in an apparent effort to promote public acceptance of the re-legalisation of torture, irrespective of the unreasonableness of this situation. The fact that torture has other purposes (such as the creation of bogus intelligence and the terrorisation of subject populations) is seldom if ever mentioned by big media. in 2014 US President Barack Obama casually admitted "We tortured some folks", but did not go on to make the (legally obvious) point that this meant crimes had been broken and that people would be charged as a result.

Indefinite detention without legal process, in many countries more or less unthinkable in the 20th century, is increasingly being used in the 21st century, particularly against "illegal immigrants" as well as "suspected terrorists". Canada was ahead of the curve in passing a 1978 law to explicitly permits it, while Australia did so in 1994 and the UK passed legislation to the same effect in 2006. In USA the 2012 NDAA authorised this - a law that was challenged by Chris Hedges but deemed legal by the US Supreme Court in April 2014.

In 2008 the UK's Crown Prosecution Service began claiming that for nebulous reasons of "national security", some trials would have to be held partly in secret. In 2014, the claim was expanded to state that completely secret trials were needed. This was not allowed on appeal, but nevertheless, the number of secret trials is increasing and the trend seems pretty clear. 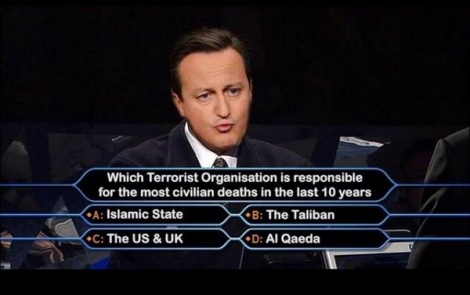 Rebranded "targeted killing" just as torture was rebranded "extreme interrogation", regimes such as US under President Obama have claimed, since their murder of Anwar al-Awlaki came to light, that they have the legal right to kill anyone they deem as a "terrorist" suspect, with no judicial process needed.

The French Finance Minister Michel Sapin claimed in 2015 that it was necessary to "fight against the use of cash and anonymity in the French economy" since this facilitated terrorism. He planned to ban French residents from making cash payments of over €1,000 (€10,000 for tourists). This is just one of a range of restrictions which have lead several commentators to suggest that these are first steps towards "banning cash". Spain has banned cash transactions of over €2,500 and Italy has a limit of €1,000.[13][14][15] The governments of several countries, including Sweden, Denmark and Australia have declared their intention to ban cash.

The deep politicians who organised the "War on Terror" are not short of money making schemes[16] so to suggest that they are motivated by financial gain would be incorrect. However, lower level deep state functionaries have been quick to cash in on the burgeoning "counter-terrorism" industry. Promoting "terrorism" and fear of it is a multi-billion dollar business opportunity both inside government[17] and out.[18] The direct financial self-interest of "terror experts" and others in the trade, from deep state functionaries through to CEOs and institutional investors, quite possibly deters all but a tiny minority from sincere questioning of its deeper significance.

The presence of fictional terrorists facilitates crimes such as bombings to kill people or destroy embarrassing evidence, such as the evidence concerning Whitewater which vanished after the OKC bombing, or the financial investigations which were abandoned after 9/11.