From Wikispooks
< Deep state
Jump to navigation Jump to search

This page is about the policies of deep state groups in general. See also the Deep State/Policy for a description of the policy of The Deep State (capital 'D', capital 'S').

Policy considerations of deep states are always limited by the need to avoid exposure - if the group ever becomes so exposed as an undeniable tyranny but retains control, it has transitioned an open dictatorship and must reckon with increasing popular resistance. Like The Deep State, avoiding public exposure is an overriding objective. This places some checks on individual deep states, although post 9-11, they are increasingly incautious in their operations, as they struggle to respond to an informational environment in which it is harder than ever to control the narrative.

Relations with The Deep State

Post 9-11, no deep state group (or would be deep state group) can avoid dealing with The Deep State. As with relationships between individual deep state operatives with a single deep state group, collaboration, competition, quid pro quo deals and betrayals are all par for the course. Friendly or not however, the common need to avoid exposure is viscerally understood among all deep states.

Influence rather than power

Power over the supranational deep state is somewhat of a contradiction in terms, but since the SDS is constituted from deep states, individual deep states are certainly in a position to influence it. An analogy with the human body may help: the body's organs are separate but connected and quite obviously mutually inter-dependent. The brain may like to think it is "in charge", but conscious control over most muscles and the ability to choose what and when to eat is really only the tip of the iceberg; the brain's continued health rests upon processes such as swallowing and digestion which are carried out by other organs. Similarly, the separate deep states or particular deep politicians within them may claim to be "in charge" — and they may believe they are — but their influence should not be mistaken for power to control.

As the self-styled sole "superpower", one might assume that the US Deep state is the single most influential deep state, considering the capabilities of the US' many spook groups, and its pre-eminence as regard business and military technology. However, since 9-11 it has become ever more exposed,[1] appears to be undergoing a crisis of leadership and general coherency.

While Trump is widely derided as a puppet leader, Israel's Benjamin Netanyahu appears to be in 2020 what George Bush senior was in the 1980s - a deep politician who is also a national leader. Although the bid to have Netanyahu jailed for corruption is testimony to infighting within the Israeli Deep state, the worldwide campaign to try to demonise any criticism of the Israeli government as "anti-semitic" is testimony to the group's remarkable reach.[2] The influence of the UK deep state is generally agreed[By whom?] to have declined alongside the British Empire after World War I, although the group remains influential within The Deep State.

Although frequently done, to ask "who is in charge?" is to miss the point that there isn't necessarily anyone in charge as such. Moreover, the distinctions between the deep state groups were always somewhat artificial and have been fast eroded since the 1970s. Although many of the members of the Supranational Deep State are on the payrolls of government agencies, it would be a mistake to assume this had implications as far as ultimate loyalty.

The secrecy of the deep state is not the secrecy of the business world, in which contracts are signed along with non-disclosure agreements. In the world of commerce, broken contracts can be shown to a judge. Deep politicians have no such recourse.

Like in other aspects of the criminal underworld, deep state deals are word of mouth agreements, since the extra-legal nature of deep politics requires documentation is kept to an absolute minimum. This leaves wide scope for misunderstandings or back stabbing by unscrupulous deep politicians. Two celebrated examples of such betrayals by George H. W. Bush were the statement of April Glaspie to Saddam Hussein that "[W]e have no opinion on the Arab-Arab conflicts, like your border disagreement with Kuwait"[3] and the verbal agreement with Mikhail Gorbachev not to expand NATO eastwards.

Control of the populace

Individual deep states have a similar interest in controling the minds and bodies of people as do The Deep State, the difference being that they are in closer touch with a much smaller group, i.e. the populace of a single locality. They must be well versed in a single nation's language, history and culture, how to spark the public imagination, which enemy images are most likely to inspire fear and so forth. For this reason, the majority of a nation's deep state group tend to be natives of that country. Conversely, since it is essential for deep states to be able to successfully network abroad, they need to have specialists in other areas than just the core nation.

Divide And Rule has long been a strategy used by small groups to dominate large populations. A testimony to this is the symbol of freemasonry.

The Roman deep state famously provided "Bread & Circuses" for its population, the ancient equivalent of consumerism. 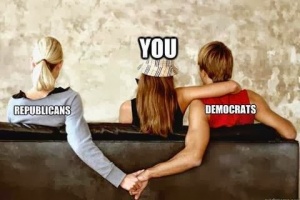 In the 20th century, mass media meant television, radio and newspapers, each of which was expensive to set-up and simple to monitor. As a consequence, deep state control of the media was not difficult to effect. The popularisation of the internet in the 21st century has lowered the barriers to entry for would be broadcasters of information, resulting in an explosion of formerly proscribed opinions.

The traditional responses to unwanted opinions have been dramatically failing, with confidence in commercially-controlled media lower than ever.