As of 2019, the US Deep state is more exposed than ever. Ironically, its ever tighter control of corporate media has speeded the exodus away from corporate media to the internet as a channel of information. A 2017 poll of the US public revealed that US adults' greatest fear (75% either afraid or very afraid) was "corrupt government officials"; while few grasp the details of the corruption at the heart of the US government, people do know that it exists. Meanwhile, Mori polls indicate that trust in the commercially-controlled media is at an all time low, having steadily declined for years.

The Jeffrey Epstein Affair exposed his sexual blackmail operation to a wide audience, while his "apparent suicide" was widely disputed, further exposing both the US prison system and large sections of the corporate media.

The US deep state, like other deep states, has worked assiduously to conceal its existence, both from the general public and from historians. Like other deep states, it has gradually lost control over information, leading to a relentless exposure. The shock of 9-11 briefly halted this tendency, but the 21st century has seen a rapid exposure of deep political matters, as the internet facilitated collaboration amongst activists and investigative journalists just as it allowed the meshing of the separate deep states into the Supranational Deep State. 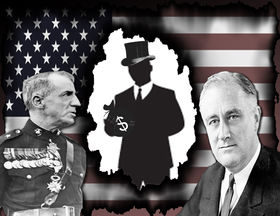 The 1933 Business Plot was a Wall Street-backed plan to carry out a coup d'etat and depose US President Franklin Roosevelt. It was publicly exposed by Smedley Butler, the US General whom the financiers chose to head the coup, and who testified to the House Unamerican Activities Committee. Time Magazine and other US corporate media attempted to paint Butler as a phantasist.[1]

There were extensive US Congressional hearings about the plot, but by the 1990s, very few written records of the hearings survived, and the few remaining transcripts have had the names of the senior plotters redacted. One conjectured explanation for this is that FDR agreed with the plotters not to press legal action in return for their acceptance of his New Deal policies.[2]

The assassination of JFK was carried out by an alliance of JFK's enemies, including CIA operatives, anti-Castro Cuban exiles and Big Oil executives. The biggest unforseen event was that the patsy, Lee Harvey Oswald was captured alive by the Dallas Police, and so Jack Ruby was prevailed upon to assassinate him before he could tell his side of the story. The produced a rather implausible "lone nut kills lone nut" narrative, which stretched public credulity beyone breaking point and lead LBJ to set up the Warren Commission to try to increase the credibility of the FBI's official narrative.

The chairman of the HSCA, Frank Church, displays a CIA poison dart gun used for covert assassinations. It could cause either cancer or a heart attack.

George H. W. Bush was brought in to as CIA director supposedly as an outsider to clean up the agency. In fact, he had a long history of work for the agency, and was leader of the US deep state at the time. This would only emerge decades later, and remain largely unknown for years until Russ Baker published Family of Secrets in 2009.

In 1986 historian Richard Rhodes wrote of "a separate, secret state with separate sovereignty linked to the public state through the person and by the sole authority of the President."[3] The late 20th century saw various exposes which challenged the US deep state's official narrative about individual deep events, including Gary Webb's Dark Alliance which revealed the involvement of the CIA in the cocaine trade. However, since they failed to trace connections between different events, the level of systemic corruption was not understood and so until the 21st century, the US deep state remain largely unrecognised as a coherent entity.

Historian Anthony Sutton wrote the first widely circulated book about Skull and Bones, which has been an important secret society in the development of the US Deep state. He also wrote about the UK- and US deep state. 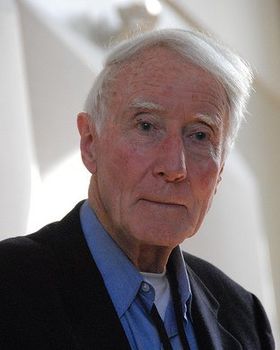 Former Canadian diplomat turned academic, Peter Dale Scott, has lead the research effort into deep politics — indeed, he coined the phrase. He faced covert censorship (an incorrectly issued ISBN number) when he published his book The War Conspiracy in the early 1970s[citation needed], but has been effective at reaching a wide audience through the internet. In 2015 he published The American Deep State.

Bill Moyers was White House Press Secretary at the time of the JFK assassination and between 1967 and 1973 he attended 6 Bilderberg meetings. In 1987 he produced a TV show entitled The Secret Government: The Constitution in Crisis, which highlighted the many unofficial channels available to sideline the official democratic processes of government.

In 2004, Journalist Russ Baker set out to try to understand how George W. Bush — whom he described as "frighteningly inadequate" — could have become US President. His researched exposed the lifelong CIA career of his father, George H. W. Bush. His 2009 Family Of Secrets dramatically exposed Bush Sr. as a deep politician with connections to deep events including the JFK assassination and the Watergate coup.

Mark Gorton, a millionaire financial trader began to research the JFK assassination quite by chance, and his researches lead him to trace the activities of the US deep state. On the 50th anniversary of the assassination, he wrote an unfinished essay, "Fifty Years Of The Deep State", which was published on Gawker in 2014[4] and featured on Unwelcome Guests.

Out Of Shadows, produced in April 2020, "lifts the mask on how the mainstream media & Hollywood manipulate & control the masses by spreading propaganda throughout their content". It features Kevin Shipp and Liz Crokin.

The US deep state, like other deep states, is increasingly widely recognised both in and outside the US, as is the fact that it collaborates globally as a part of the Supranational Deep State. A 2017 survey of the US public determined that 3/4 of them were either "afraid" or "very afraid" of corrupt US government officials.

The CIA were concerned that a significant proportion of the US population did not trust the findings of the Warren Commission that JFK was killed by a "lone nut". To this end, they developed the meme of the "conspiracy theorist" to try to marginalise any dissent from official narratives - a single word which encompassed the contrasting meanings of (i) being crazy, (ii) doubting the official narrative of an event and (iii) claiming that influential people have organised in secret. As of 2018, this remains a popular strategy of commercially-controlled media to try to counter suggestions of high level corruption in the US government.

Just as Barack Obama capitalised upon voter dissatisfaction by offering "change you can believe in", so in 2016, Donald Trump talked of "draining the swamp" to capitalise upon awareness of the US deep state. He has done as little as Obama in this regard, deepening suspicion of the US political system.

The US deep state has operational control over the tech companies of Silicon Valley and is research strategies and tactics of internet censorship. The long-standing belief in freedom of speech presents a problem to this campaign, one that is being tackled by introducing new crimes such as "hate speech" and "non-violent extremism". The Streisand effect presents a real problem to this effort — the possibility that clumsy online censorship efforts will in fact draw attention to the material they are trying to remove. Technical, legal and illegal actions are underway to avoid this effect by developing artificial intelligence algorithms which can censoring content before it can be spread.

In 2016, the US deep state launched a campaign to try to introduce the phrase "Fake News ''Website''" into common parlance, to suggest that websites were more likely to carry "fake news" (i.e. propaganda) than traditional media. This phrase was abbreviated into "fake news" and spawned a counterproductive discussion about the importance of checking references and documenting sources — one which further decreased trust in deep state controlled corporate media.