From Wikispooks
(Redirected from Cheney)
Jump to navigation Jump to search

Dick Cheney is a neoconservative deep politician with close ties to the MICC. Named "The worst Dick since Nixon", Cheney topped a list of "The Top 43 Appointees Who Helped Make Bush The Worst President Ever".[1] 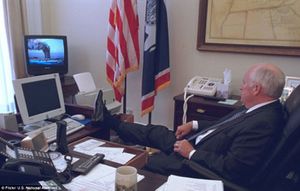 Vice President Dick Cheney watching a live TV news report of the 9/11 attacks on the morning of September 11, 2001.

Cheney was in the White House during the attack. He said he learned of the attack from a clerical secretary. In an interview with Tim Russert on NBC, Cheney indicated that President George W Bush made the decision that day to scramble fighter jets. This is contrary to standard operating procedures, and raises the question of whether and why the President delayed the scrambling of jets. According to the 9/11 Commission's report, Cheney did not issue orders to shoot down hostile aircraft on September 11, 2001, until long after the last hijacked airliner had already crashed. However, he later admitted on camera to giving the order to shoot down a flight after three had already hit their targets that morning. This seems likely to have been flight 93.[2]

George W. Bush claimed that it was important for him and Cheney to appear together before the 9/11 Commission so that commission members could "see our body language... how we work together." Cheney and Bush testified in the Oval Office, not under oath and the session was not officially transcribed. Initially, Bush insisted that he testify only to the Chairman and Vice Chairman of the commission, but later agreed to testify before the full panel.[3]

Richard Lambert is the FBI agent who headed the FBI's "investigation" into the Amerithrax case from 2002 to 2006. In a 2018 interview for the Opperman Report he stated that Dick Cheney was extremely interested in the progress of the investigation. 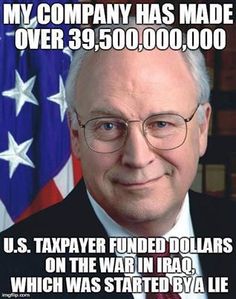 On August 26, 2002, Cheney stated "There is no doubt that Saddam Hussein now has weapons of mass destruction. There is no doubt he is amassing them to use against our friends, against our allies and against us." Newsweek referred to it as "Cheney’s Biggest Lie", yet said nothing about potential charges - as if mendaciously starting a war of aggression were not agreed to be "the supreme international war crime".[4] Cheney personally made millions of dollars from the Iraq war, while Halliburton made around $40 billion from contracts with the US government.[5]

In 2005, at the urging of Vice President Cheney, a provision was inserted into the the Federal Energy Policy Act of 2005 that has come to be known as the "Cheney loophole". This allowed the fracking industry to circumvent the Safe Drinking Water Act by exempting fracking fluids, thus fast tracking shale fracking as a source of cheap natural gas.[6][7]

It is widely alleged that Cheney circumvented the Director of The CIA to order the formation of an "ultrasecret"[9] CIA assassination squad modelled on Israel hit squads (which Seymour Hersh described as an “executive assassination ring.”)[10] after 9/11.[11] In early 2009 Seymour Hersh, at a speaking event at the University of Minnesota, said that Dick Cheney ran a secret hit squad that was kept from Congressional oversight.[12][13][14][15][16] As of August 2019, no connection is known to have been proven to the 9/11 Premature deaths. 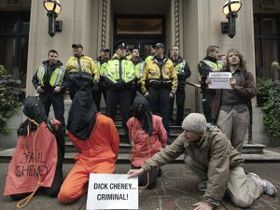 Protesters outside the Vancouver Club

Cheney's support for torture was noted by the Kuala Lumpur War Crimes Commission, who found him guilty in absentia in connection with the events of Abu Ghraib.[17] In April 2012, Cheney cancelled a speaking engagement in Toronto "because he feared angry protests by those calling for his arrest for war crimes".[18]