Étienne Davignon is a deep politician and former chair of the Bilderberg Steering committee.

After receiving a Doctorate of Law from the Université catholique de Louvain, Davignon joined the Belgian Foreign Ministry, in 1959, and within two years had become an attaché under Paul-Henri Spaak, then Minister of Foreign Affairs (a fellow Bilderberger-to-be who would later be NATO Secretary General).[1]

As chairman of Société Générale de Belgique, Étienne Davignon was a member of the European Round Table of Industrialists.[1]

Davignon later became the first head of the International Energy Agency,[1] from 1974 to 1977, before becoming a member of the European Commission, of which he was vice-president from 1981 till 1985. From 1989 to 2001, he was chairman of the Belgian bank Société Générale de Belgique, which is now part of the French supplier Suez and was not an arm of the French bank Société Générale, but a Belgian institution. He is now Vice Chairman of Suez subsidiary, Suez-Tractebel.[2]

Davignon attended many Bilderberg conferences (at least as far back as 1977) and took over from Peter Carrington as chairman of the annual Bilderberg conference in 1998, chairing until 2011.[3] He is a member of the Steering Committee of the Bilderberg Group.[4] He moderated the 1986 Bilderberg discussion on 'Current Events: Terrorism'.

Étienne Davignon stated in a 2009 interview that the Bilderberg group "helped create the euro in the 1990s"[5], a claim which is given credence by the leadership of the European Monetary Institute, the European Central Bank and by a leaked report of the 1955 Bilderberg meeting which mentions a desire for a single European currency. 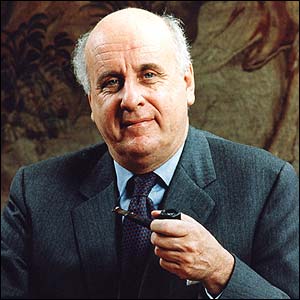 +
Display lifespan
Born 4 October 1932 +
Has almaMater
Catholic University of Louvain +
Has bilderbergCount
32 +
Has birthPlace
Budapest +  and Hungary +
Has cercleCount
0 +
Has facebook
https://www.facebook.com/pages/Étienne-Davignon/138307152860713 +
Has fullPageName
Étienne Davignon +
Has fullPageNamee
%C3%89tienne_Davignon +
Has image