Operation 40 was a CIA-sponsored hit squad of the 1960s, composed mostly of Cuban exiles. It was active in the United States and the Caribbean (including Cuba), Central America, and Mexico. Many researchers, including Daniel Hopsicker and Mark Gorton, have pointed to Operation 40 involvement in the JFK Assassination.[1][2] Members of operation 40 have played key roles in deep events decades later, from CIA Drug trafficking to the Watergate Coup to assassinations such as those of John Lennon and Adelino Amaro da Costa, and even in the 9/11 Cover up.

The group was officially non-existant for decades.[citation needed] In 2014 however the CIA admitted that Operation 40 existed; a FOIA request by MuckRock to the CIA returned 2 documents with a total of just 6 pages.[3]

On 11 December 1959, following the Cuban Revolution of January 1959, Colonel J.C. King, chief of the CIA's Western Hemisphere Division, sent a confidential memorandum to CIA director Allen W. Dulles. King argued that in Cuba there existed a "far-left dictatorship, which if allowed to remain will encourage similar actions against U.S. holdings in other Latin American countries." As a result of this memorandum, Dulles established a ZR/RIFLE unit named Operation 40, from the "Group of 40" of the National Security Council group that followed Cuba. It was created by US President Dwight D. Eisenhower in March 1960. US Deep state control was exercised through his vice-president, Richard Nixon.

Tracy Barnes functioned as operating office of the Cuban Task Force. He called a meeting on 18 January 1960, in his temporary office near the Lincoln Memorial. Those attending included David Atlee Phillips, Jacob 'Jake' Esterline, E. Howard Hunt, and 'Frank Bender' (an alias of Gerry Droller), all of the CIA.[5][6][7] Barnes, Phillips, Esterline, Hunt, David Sánchez Morales and others had previously worked together in the 1954 overthrow of Jacobo Arbenz in Guatemala, organized by the CIA under the code-name Operation PBSUCCESS.

On 17 March 1960, President Eisenhower signed a National Security Council directive on the anti-Cuban covert action program authorizing the CIA to organize, train, and equip Cuban refugees as a guerrilla force to overthrow the government of Cuban prime minister Fidel Castro.

The group recruited former Batista-regime intelligence officers and mob henchmen such as Eladio del Valle and Rolando Masferrer, soldiers of fortune such as Frank Sturgis, and CIA case officers such as Col. William Bishop and David Sanchez Morales, who managed teams of assassins.[8] 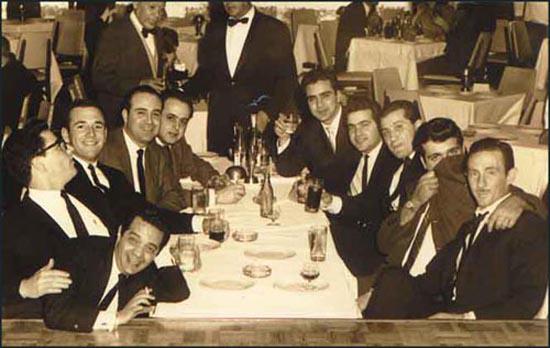 This photograph was taken in a nightclub in Mexico City on 22nd January, 1963. It is believed that the men in the photograph are all members of Operation 40. Closest to the camera on the left is Felix Rodriguez. Next to him are Porter Goss and Barry Seal. Tosh Plumlee is attempting to hide his face with his coat, and William Seymour is in front of him. Others in the picture are Alberto Blanco (3rd right) and Jorgo Robreno (4th right)."- text from Spartacus Educational site by John Simkin[10][11]

The took a major part in the April 1961 Bay of Pigs Invasion directed against the government of Cuban prime minister Fidel Castro. It is also implicated in the JFK Assassination and many other cabal operations in the 1970s, 1980s and beyond. See the individual members' pages for more details.

On 4 March 1960, La Coubre, a ship flying a Belgian flag, exploded in Havana Bay. It was loaded with arms and ammunition that had been sent to the armed forces of the post-revolution government of Cuba. A second bomb was set nearby and timed to go off later - to kill the volunteers attempting to rescue the (primarily civilian) victims of the first explosioJack Alston Crichtonn. The explosions killed 75 people and over 200 were injured.[5] Fabian Escalante, an officer of the Cuban Department of State Security (G-2), later claimed that this was the first successful act carried out by Operation 40.[citation needed] Operation 40 was not only involved in sabotage operations. One member, Frank Sturgis, allegedly told author Mike Canfield: "this assassination group (Operation 40) would upon orders, naturally, assassinate either members of the military or the political parties of the foreign country that you were going to infiltrate, and if necessary some of your own members who were suspected of being foreign agents...We were concentrating strictly in Cuba at that particular time." The group sought to incite civil war in Cuba against the government of prime minister Fidel Castro. "In October 1960, they realize that this project has failed, and that is when Brigade 2506" was created, a CIA-sponsored group made up of 1,511 Cuban exiles who fought in the April 1961 Bay of Pigs Invasion.

"The first news that we have of Operation 40 is a statement made by a mercenary of the Bay of Pigs who was the chief of military intelligence of the invading brigade and whose name was Jose Raúl de Varona Gonzalez," writes Escalante. "In his statement this man said the following: in the month of March, 1961, around the seventh, Mr. Vicente Leon arrived at the base in Guatemala at the head of some 53 men saying that he had been sent by the office of Mr. Joaquin Sanjenis, Chief of Civilian Intelligence, with a mission he said was called Operation 40. It was a special group that didn't have anything to do with the brigade and which would go in the rearguard occupying towns and cities. His prime mission was to take over the files of intelligence agencies, public buildings, banks, industries, and capture the heads and leaders in all of the cities and interrogate them. Interrogate them in his own way".

On 17 April 1961, Vicente Leon Leon, with other members of Operation 40, landed at the Bay of Pigs via the CIA-chartered freighter Atlantico. He was killed in action.[14][15] Other members are reported on the freighter Lake Charles that retreated without landing any attackers.[16]

In a 9 June 1961 memorandum[17] to Richard Goodwin, historian and Kennedy advisor Arthur Schlesinger, Jr. wrote: "Sam Halper, who has been the New York Times correspondent in Havana and more recently in Miami, came to see me last week. He has excellent contracts among the Cuban exiles.... Halper says that CIA set up something called Operation 40 under the direction of a man named (as he recalled) Captain Luis Sanjenis, who was also chief of intelligence.... But the CIA agent in charge, a man known as Felix, trained the members of the group in methods of third degree interrogation, torture and general "terrorism". The liberal Cuban exiles believe that the real purpose of Operation 40 was to 'kill Communists' and, after eliminating hard-core Fidelistas, to go on to eliminate first the followers of Ray, then the followers of Varona and finally to set up a right wing dictatorship, presumably under Manuel Artime.... The exiles believe that all these things had CIA approval.... Nice fellows." Halper actually worked for Time, not the New York Times.

Citing a 1975 article, Peter Dale Scott wrote in 1977 that "Seven years after the event, to its credit, the New York Times finally revealed a little of the story about the wind-up of the CIA's Operation 40 because of its narcotics activities."[18]