From Wikispooks
< Deep state
Jump to navigation Jump to search

The phrase "Deep state" experienced a surge in popularity in February/March 2017, after some commercially-controlled media outlets began to use it after the 2016 US Presidential election. As WhoWhatWhy observed “All of a sudden, everybody is talking about the Deep State [in connection to USA].” [1]

By March 2017, the corporate media was awash with conflicting usages of the term. ABC wrote in March 2017 that in "its current use, the concept has been twisted and broadened,"[2] an acknowledgement that the 2017 version is out of step with the original meaning.

The original Turkish (derin devlet) phrase was mentioned in many articles, though the 1996 Susurluk car crash which inspired that phrase was rarely mentioned.[3]

This apparently chaotic set of usages is interesting when considered with the evidence that the deep state controls the corporate media. Those interested in uncovering the original deep state are pointed to the work of the deep politics researcher who coined the term - Peter Dale Scott.

As with "Fake News", the phrase "deep state" has a range of meanings, generally but not exclusively pejorative. Both phrases were dramatically popularised after the 2016 US Presidential election. Most of those writing about the "deep state" may be unaware that not only is the "deep state" real, but that it has a large degree of control over corporate media. The phrase "Fake news" may well have been launched by the deep state as an effort to stem the rising popularity of non-corporate, independent, uncontrolled media. 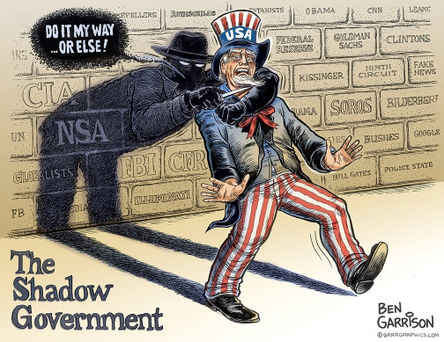 A cartoon of the "Shadow Government" from February 2017, giving prominence to the NSA as one of many behind the scenes forces

WhoWhatWhy noted in February 2017 that the term 'Deep State' was as popular as #resistance[4]. In February 2017, the Washington Post wrote that the "deep state" is a "sexy new label being used in Washington to describe embedded anonymous bureaucratic bias against President Trump and Republican rule."[5] While there may be an entrenched bias against Trump by many in congress, to characterise this as the "deep state" is to overlook its fundamentally non-partisan nature. In February 2017, the New York Times wrote that “Though the deep state is sometimes discussed as a shadowy conspiracy, it helps to think of it instead as a political conflict between a nation’s leader and its governing institutions.” [6] This captures the non-partisan nature, but misleads about the extent to which the US President is already a puppet leader.

The deep state, in its original usage had long been agreed to be non-partisan. Mike Lofgren, admittedly a somewhat dubious source,[7] wrote during the administration of Barack Obama in 2014 that “There is the visible government situated around the Mall in Washington, and then there is another, more shadowy, more indefinable government that is not explained in Civics 101 or observable to tourists at the White House or the Capitol. The former is traditional Washington partisan politics: the tip of the iceberg that a public watching C-SPAN sees daily and which is theoretically controllable via elections. The subsurface part of the iceberg I shall call the Deep State, which operates according to its own compass heading regardless of who is formally in power.” [8] Peter Dale Scott approves of this 'iceberg' metaphor for giving an impression of the size of the deep state, but emphasises that it fails to reflect the fluid nature of the deep state.[citation needed]

The LA Times wrote that "In a country controlled by the deep state, members of the armed forces and intelligence agencies can overthrow presidents they don’t like; that’s what happened in Egypt in 2013. They hold veto power over major decisions. They often run large parts of the economy, or at least enough government contracts to make their families rich. And they’re rarely held accountable for their actions. They act with impunity. U.S. intelligence agencies, on the other hand, are restrained by law."[9] It seems they missed the coups d'etat that have occurred in the US since November 1963.

The Atlantic echoed this official narrative in February 2017, with an article entitled "There Is No American 'Deep State'" which argued that "The deep state was a kind of criminal organization. What we’re witnessing in the U.S., it’s basically institutional channels."[10] The Atlantic's article went so far as to suggest that there are "dangers in allowing a deep state to become a real menace in the mind of the public."[10]

In March 2017, CNN, as if hoping to influence the meaning of the phrase even amongst readers who didn't read their piece gave it the headline "What's a 'Deep State' and why is it a new buzzword for the online right?"[11] 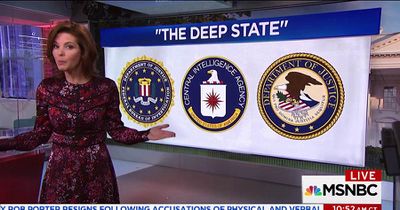 A 2018 MSNBC show headlined What is the ‘deep state’ and how dangerous is it? was summarised as follows "Former CIA Operative Glenn Carle, who wrote about the ‘deep state’ conspiracy, explains this idea and why some Trump supporters are pushing it."[12]

Not all corporate media has admitted that there is a deep state in the US. Max Fisher headlining a March 2017 New York Times article "What Happens When You Fight a ‘Deep State’ That Doesn’t Exist"[13] and the New Yorker's even more direct "There Is No Deep State".[3] Loren DeJonge Schulman wrote for Politico that "if somebody uses the term “Deep State,” you can be pretty sure they have no idea what they’re talking about."[14]

CNN has been fairly consistent at denying the existence of the US deep state, and in 2018 has been depicting it as a "conspiracy theory" popular with Donald Trump. In November 2018, Z. Byron Wolf headlined a CNN report Trump embraces deep state conspiracy theory.[15] When reporting on Trump's September 2018 claim that the Deep state is a threat to democracy, CNN put the phrase 'deep state' in single quote marks.[16] Reporting on an anonymous New York Times editorial, Z. Byron Wolf took a different tack, headlining a story There may actually be a 'deep state.' It's just not the one Trump fears.[17]

3 December 2018 Robin  An important topic
A fairly short overview of how the corporate media, after years of ignoring the phrase, suddenly started to talk about the "deep state".