Shinzō Abe is a Japanese politician. As Japanese PM he pushed to remilitarise the nation, re-introducing intelligence agencies, modifying the Japanese constitution to allow for foreign wars and first strikes on other countries.[1] He has presided over the country's aggressive support of the "war on terror" narrative, increasing mass surveillance of citizens and stiff penalties for those accused of conspiring to commit acts of "terrorism".[2] 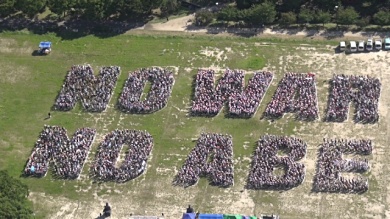 Shinzō Abe "spent considerable effort" to facilitate Japan's remilitarization.[3] As with the decision to rebuild the intelligence agencies, this may reflect a success of the deep state in taking effective control over the political leadership of country.

Abe became Prime Minister of Japan on 26 September 2006. He announced a new cabinet on August 27, 2007. However, the new agricultural minister Takehiko Endo, involved in a finance scandal, resigned only 7 days later. On September 12, 2007, only three days after a new parliamentary session had begun, Abe announced his intention to resign his position as prime minister at an unscheduled press conference.[4][5] Abe said his unpopularity was hindering the passage of an anti-terrorism law, involving among other things Japan's continued military presence in Afghanistan. Party officials also said the embattled prime minister was suffering from poor health.[6] On September 26, 2007 Abe officially ended his term as Yasuo Fukuda became the new Prime Minister of Japan.

He became Prime Minister of Japan again on 26 December 2012. In March 2015, he announced a plan to rebuild the Japanese intelligence agencies, using the UK's MI6 as a model. The Intelligence agencies were dismantled by the Allies after World War II.

The Kyodo news agency reported that on 22 April 2015, a drone with traces of radiation was landed on top of Abe's office, carrying a camera and a small bottle with the radioactive symbol. Tests found it was carrying a small amount of radioactive caesium, reported. Abe was in Indonesia at the time, attending an Asian-African conference.[7]

On 24th April, radioactive contamination was discovered in a park in Tokyo.[8]