The United States Department Of Justice (USDOJ) is a US government body based on retributive justice. Since 2001 in particular, this group is overturning age old legal precedents. In 2013, for example, Hedges v. Obama clarified that US citizens may be arrested and detained indefinitely, without need for a legal procedure. In 2017, Donald Trump stated that he could "do whatever I want with the Justice Department."[1]

Top down, hierarchically defined justice decided by a privileged few and enforced by violence if necessary. What could possibly go wrong with that ;)?

In an essay about 9-11, Paul Craig Roberts, former associate editor of the Wall Street Journal wrote "Justice is something that exists outside the borders of the United States. Never expect to find justice within the United States."[2] Mark Gorton includes the "criminalization of the Justice Department" in his summary list of the crimes of the cabal.[3] This ranges from complicity in the massive financial crimes of 9/11 and the bank bailouts to the failure to investigate individual murders such as that of Sunny Sheu.

In 2014, the US Supreme Court ruled that for-profit corporations such as Hobby Lobby should be considered "persons" under a law intended to protect religious liberties. By contrast, the US government claimed that under the same law that humans imprisoned in Guantanamo Bay should not be considered "persons".[4]

Investigation of the NSA

The US DOJ spent a over year looking at the possibility of indicting the NSA after it was revealed that Richard Nixon had instructed the agency to spy on anti-war protestors. They concluded that such a prosecution would result in too many secrets being revealed in court, and so they created FISA in an effort to prevent future US presidents from using the NSA for domestic political purposes. James Bamford states that this was ineffective because of the ease of subversion of the FISA process.[5]

The US DOJ has consistently tried to block any independent legal action surrounding the events of September 11, 2001, and in the course of doing that has repeatedly ruled that both the governments of USA and Saudi Arabia are entitled to "sovereign immunity" - although this has not been extended to the government of Afghanistan.[6] 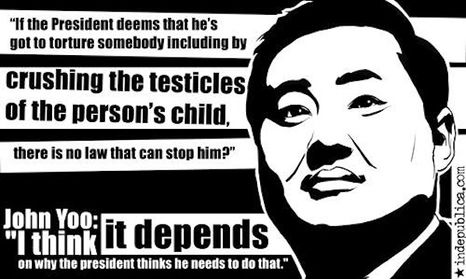 John Yoo, a US lawyer whose infamous 2002 "torture memo" lifted legal restrictions on the use of torture in USA, claiming that the War Crimes Act of the Geneva Convention need not apply to 'enemy combatants'.

The CIA has long since carried out torture with impunity. In 2005 judge Richard W. Roberts issued a court order prohibiting the CIA destroying evidence of its use of interrogations in July 2005.[7] CIA Director Michael Hayden acknowledged in December 2007 that the CIA had subsequently destroyed hundreds of hours of tapes of the use of "extended interrogation techniques", including waterboarding, but no action has been taken against him. Abu_Zubaydah was torturered for years in Guantanamo Bay, and his torturers were assured that if he survived, he would "remain in isolation and incommunicado for the remainder of his life." He has filed over a dozen legal pleas, which have simple been ignored by Judge Roberts.

Roberts was supposed to deal with the please of Abu Zubaydah, who was imprisoned without charge for years in Guantanamo Bay and tortured. Zubaydah lodged over a dozen legal pleas since 2008, none of which had been handled by Roberts. This led Zubaydah's lawyers to file motion asking Roberts to recuse himself for "nonfeasance" in January 2015.[8]

Sundus Shaker Saleh, an Iraqi single mother and refugee living in Jordan filed a complaint in March 2013 against George W. Bush, Richard Cheney, Donald Rumsfeld, Colin Powell, Condoleezza Rice and Paul Wolfowitz, arguing that they lied to the US public to deceitfully initiate a war of agression against Iraq. The United States Department of Justice brought two motions to dismiss the suit, claiming that since the defendants were acting within their scope of employment when planning and waging the Iraq War, they can not be held individually accountable for the harm caused. The case is was last appealed in January 2015.[9]

The US Supreme Court ruled, 5-4, that the case should be dismissed because the plaintiffs didn't have "standing" because the ACLU couldn't prove with near-certainty that their clients, including journalists and human rights advocates, were targets of surveillance. The court relied on two claims by the Justice Department

Both of these points are manifestly untrue after leaks by Edward Snowden prove that mass surveillance is targeting almost everyone, and no one is being notified of the fact. These manifest untruths notwithstanding, the ruling remains, more or less establishing a de facto precedent that anything done in secret is lawful.[10]

Chris Hedges and a group of other journalists argued that the 2012 NDAA was unconstitutional. The act gave permission to the U.S. government to indefinitely detain people "who are part of or substantially support Al Qaeda, the Taliban or associated forces engaged in hostilities against the United States". On July 17, 2013, the Second Circuit Court of Appeals, citing Clapper v. Amnesty International USA, ruled that the plaintiffs lacked legal 'standing' to challenge the law[11][12][13] because it “simply says nothing about the government’s authority to detain citizens.”[11] The court held that under their interpretation the government could not use the particular law challenged by the citizen plaintiffs to militarily detain them, so they had no basis for the court to hear their case.

"Desiree Fairooz, 61, a librarian in Arlington and a Code Pink activist, guffawed when Sen. Richard C. Shelby, R-Alabama, asserted that Sessions's record for "treating all Americans equally under the law is clear and well-documented." She was speedily arrested by a U.S. Capitol policewoman. Justice Department lawyers reportedly charged Fairooz with "disorderly and disruptive conduct" intended to "impede, disrupt, and disturb the orderly conduct" of congressional proceedings. Fairooz was convicted of disorderly conduct and “parading or demonstrating on Capitol grounds.""[14]

The Justice Department has allowed the DEA to seize the property of people who are not accused of a crime. In 2015, the Wall Street Journal did not criticise the practice, but observed that it had "proven to be controversial", noting that it netted $3.9 billion in 2014[15] meaning that the US police are now taking more assets than all US criminals put together.[16]

In 2014 Alayne Fleischmann‎ blew the whistle on the DOJ's collaboration with the SEC to try to sweep industry wide financial fraud under the carpet.

30 November 2018 Robin  This article points to a lot of material that expose the USDOJ for what it is.