World War III (or the Third World War), is the hypothetical successor to World War II. Considering he destructive force of modern WMDs, it could be apocalyptic...

Someone [Who?] claims that the SDS would rather start another world war than accept a reduction in their wealth and influence. Someone [Who?] claims that the US-UK-NATO project is implacably opposed to compromise with Russia and China. Recent drive to promote a New Cold War and stoke Russophobia may be a preparation for a forthcoming hot war. Therefore, unless their control of WMD can be wrested by some means, a tragedy for humanity is impending.

War was used throughout history to eliminate competitors, but the proliferation and development of WMD mean that mutual annihilation is a real possibility. The threat of such a war was used to close down inquiry into the JFK assassination.

Although obviously risky, starting a third world war could be used by the SDS to try to escape retributive justice if they felt sufficiently threatened by exposure. This possibility provides further motivation to adopt restorative justice, possibly coupled with a global truth and reconciliation commission (such as that which the incoming South African government used to close the Apartheid era) to address the activities of the supranational deep state.

After the USSR developed nuclear weapons as well as the USA, the prospect of Mutually Assured Destruction (aptly abbreviated MAD) formed the backdrop of the Cold War. The increased destructive power of modern technologies means that WW3 might mean disaster for mankind and much [2] of the natural world. 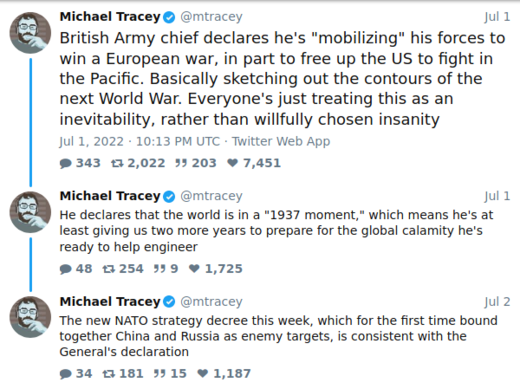 High powered biological weapons are the most cost effective way to kill masses of people. By 2022 some world experts seem to settle for the idea that the coronavirus has come out of a US bio-weapons lab, while the virus itself may not have caused significant excess mortality in the first year.

In 2019 a novel coronavirus was detected in China. Named COVID-19, it was likely created in a BSL4 lab and deliberately released by the supranational deep state. It is was used for purposes including rapid social change, promoting panic and ultimately the ushering in a global digital ID and BIS-controlled central bank digital currency and associated social credit system. Thus, it was a weapon of war but not used in a war between countries, as much as a war between classes. 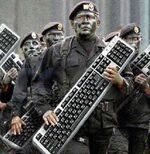 Cyberwar was pioneered by the US intelligence community and has ever since received the most funding [clarification needed][citation needed], followed by the five eyes countries; leading some commentators [Who?] to remark that the NSA can justifiably become "subject to the very rules of the game (they) have set forth.[8] Increasing reliance on automated system means that a cyber attack could have devastating effects on critical infrastructure.

There is no historical precedent for large scale cyberwar, and the "rules" of cyberwar have not been formalised. Joe Biden warned in 2021 that a significant cyber attack on the US could lead to a "real shooting war".[9][10][11] This is mirrored by statement from Jens Stoltenberg around the same time, that a major cyber attack could trigger a collective response by NATO.[12][13][14]

This escalation policy means that a false flag cyberattack provides an attractive means of starting a shooting war, since determination of the origin of such attacks is extremely difficult.

Drones technology is advancing rapidly and could be potentially disastrous for mankind, as the video Slaughterbots explained.[citation needed]

On the occurrence of the 2014 Yukos ruling the Financial Times wrote:

One person close to Mr Putin said the Yukos ruling was insignificant in light of the bigger geopolitical stand-off over Ukraine. “There is a war coming in Europe,” he said. “Do you really think this matters?”[17]

Dr Strangelove is a tragicomedy about starting World War III, and some of its characters were inspired by real US warmongers.[Who?][citation needed]