The response to the COVID-19 Pandemic appears to have been coordinated globally by The Deep State to effect social change and for economic reasons. Measures taken resemble those proposed for the long standing Continuity of Government plans: FEMA detention camps, mass surveillance, crowd control, psyops and 'emergency' legislation bypassing and/or sidelining Congress and democratic control.

Donald Trump reported that "Two [unnamed] very smart people walked into my office and said listen these are your alternatives. And that was a projection of 1.5 to 2.2 million people would die if we didn’t close it up."[1]

Corporate media has played a prominent role in "flooding the information zone" with fright propaganda. Interestingly, the coverage has been similar to the recent Russiagate and {[Skripal]] psychological operations, where most of the government's barrage of initial claims, soon collapsed under independent scrutiny.

The corporate media had little to say on the events that presaged the COVID-19 outbreak in Wuhan, China, and dismissive of Zhao Lijian's suggestion that it may have been released at the World Military games, terming it a "conspiracy theory".[2]

A "tabletop exercise" held in Autumn 2019, co-funded by the Bill & Melinda Gates foundation, which simluated the outbreak of a new and highly infectious coronavirus that killed 65,000,000 people.

Event 201 was a source of interest to alternative media, but was treated as a third rail topic by corporate media. Participants included Jane Halton‎‎, s former WHO official who was later appointed to Australia's National COVID-19 Coordination Commission. 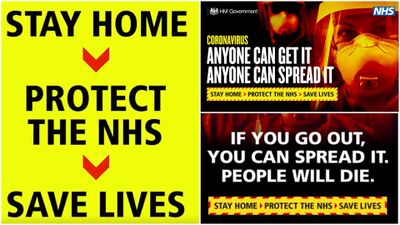 Censorship has been acute of scientific reports which suggested that COVID-19 was not as deadly as initially feared. Official government announcements worldwide have underlined possible dangers, as if a coordinated effort was underway to stoke panic about the disease.

Nominally to save lives, the vast majority of the world's nation states have instituted legal restrictions on freedom of movement and publicly announced tracking of the public using cellphone data.

Many nation states have embraced this policy, and passed "Coronavirus legislation" on grounds of a "state of emergency". One or two, including Belarus have dissented. Sweden was the only "acceptable" country that did not lock down, leading to intense pressure from abroad. 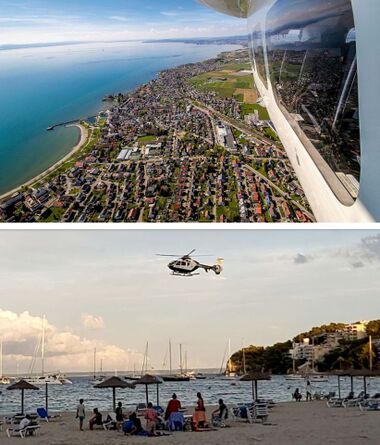 Above: At an early stage of the crisis, over the Easter weekend 2020, police officers manned a zeppelin in the area of Friedrichshafen (Germany) to observe from the air, if there are larger, illegal gatherings going on.[4] Local people tended to agree that this is clearly too much.[5] Below: On Mallorca, a helicopter was sent to a beach in September 2020 to shoo away the people.[6] - One wonders if organized crime is of much significance anymore for some police forces, or if these measures, at least to some degree, are put in place because it is easier to have some success.

By April 2020, the policy had caused a massive disruption to people's lives, huge surges in unemployment, poverty and dependence upon government handouts. Some bigger businesses such as Tesco and Amazon (Jeff Bezos) have profited massively.[7]

The economic crisis is used by deep state actors to implement pre-existing plans for a total reshuffling of the world economy.

Denmark started the trend in April, with its "Coronavirus legislation" that legalised mandatory vaccination of adults, initially envisaging the police could kick in the door of homes to forcibly inject recalcitrant people. The purchase programs of vaccines in most Western countries, like the US Operation Warp Speed, is coated in language of "enough for the entire population", implying everyone will get it one way or another. Over the year 2020, the demands for compulsion could be heard more and more frequently in corporate media, with shrill language and increasing censorship against skeptics, including medical experts. 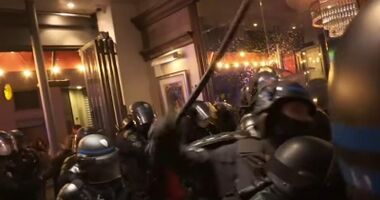 French police in riot gear storm a bar and beat people because they were not properly ‘social distancing’ during the Champions League final match on Sunday, Aug. 23, 2020 [9]

In April 2020 Liechtenstein rolled out "a radical Covid-19 bracelet programme" to report data about citizenry in real time. Initially ot was "offered" to a small number of citizens.[10] Similar legislation for realtime tracking is pushed through the German Bundestag by Minister of Health and Bilderberger Jens Spahn in a urgent preliminary ruling procedure. The law permits monitoring and data mining of complete social networks, not just single persons. [11]

A digital health travel certificate is envisaged for all citizens. If not mandatory, it will in reality be so; to take a plane, a local bus, or enter a shopping center, a citizen will have to provide an updated certificate.

Bill Gates has made it clear that he has plans to use COVID-19 to promote the idea of "digital certificates", as per ID2020's agenda:

“We don’t want to have a lot of recovered people... To be clear, we’re trying – through the shut-down in the United States – to not get to one percent of the population infected. We’re well below that today, but with exponentiation, you could get past that three million [people or approximately one percent of the U.S. population being infected with COVID-19 and the vast majority recovering]. Eventually what we’ll have to have is certificates of who’s a recovered person, who’s a vaccinated person... Because you don’t want people moving around the world where you’ll have some countries that won’t have it under control, sadly. You don’t want to completely block off the ability for people to go there and come back and move around. So eventually there will be this digital immunity proof that will help facilitate the global reopening up.”
(24 March 2020)  [12]

Echoing Bill Gates proposal for ID2020, a facial recognition app combined with vaccination is discussed in Germany and UK. People not vaccinated may 'not enter public spaces'. [13][14]

James Corbett and many other commentators noted how COVID-19 statistics seemed to be fictional, in particular the confusion of "died from" as opposed to "died with". By July 2020, more egregious miscounting was in evidence, such as including victims of falls or fatal traffic events or even gunshot as Covid deaths.[15]