After attending both public and private schools as a youth, Casey entered Fordham University with plans to pursue a career in social work. He graduated from Fordham in 1934, then after a brief stint at Catholic University in Washington D.C., moved on to St. John's University Law School in the Bronx, where he received his J.D. in 1937.[1]

In 1938 he took a job at Leo Cherne's Research Institute of America. In December 1941, following the attack on Pearl Harbor, Casey took a jobs at the Bureau of Economic Warfare and, after receiving a commission as a navy lieutenant in the navy's Office of Procurement, he graduated to the Office of Strategic Services.[1]

Casey was a member of Le Cercle, and aggressively promoted a false narrative promoted by fellow member of Le Cercle, Brian Crozier who spoke at the 1979 JCIT on "Soviet Support for International Terrorism". As CIA director, Casey played a large part in the shaping of US Foreign policy under Ronald Reagan, particularly his approach to Soviet international activity. Citing the book, The Terror Network, he echoed Crozier's claim that the Soviet Union was the source of most worldwide terrorist activity. This, in spite of CIA analysts providing evidence that this was in fact black propaganda by the CIA itself. Casey assisted in the rapid expansion of Crozier's UK operations by providing a "suitably substantial budget".[3]

High-level suspicions about Israeli-Soviet collusion were expressed as early as December, 1985, a month after Pollard's arrest, when William J. Casey, the late C.I.A. director, who was known for his close ties to the Israeli leadership, stunned one of his station chiefs by suddenly complaining about the Israelis breaking the "ground rules." The issue arose when Casey urged increased monitoring of the Israelis during an otherwise routine visit, I was told by the station chief, who is now retired. "He asked if I knew anything about the Pollard case," the station chief recalled, and he said that Casey had added, "For your information, the Israelis used Pollard to obtain our attack plan against the U.S.S.R. all of it. The coordinates, the firing locations, the sequences. And for guess who? The Soviets." Casey had then explained that the Israelis had traded the Pollard data for Soviet emigres. "How's that for cheating?" he had asked.[4]

Just hours before Casey was scheduled to testify before US Congress on his knowledge of Iran-Contra, he was reported to have been rendered incapable of speech during an operation to remove a brain tumor. In a 1987 book, Veil: The Secret Wars of the CIA 1981-1987, Washington Post reporter and biographer Bob Woodward, claimed (denied by Casey's wife, Sofia) to have gained entry into Casey's hospital room for a final, four-minute encounter. According to Woodward, when Casey was asked if he knew about the diversion of funds to the Nicaraguan Contras, "His head jerked up hard. He stared, and finally nodded yes."[5] He died less than 24 hours after the first witness, Richard V. Secord in Congressional hearings on Iran-Contra affair had named him as having assisted in providing arms to Nicaraguan rebels after Congress forbade such support.[6]

A Document by William Casey 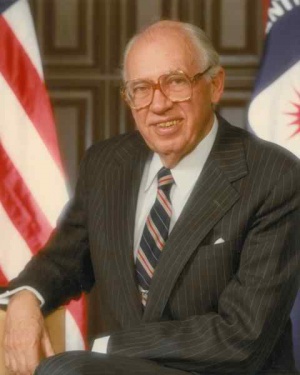