The 2019 Bilderberg (the 67th) had participants from 23 countries,[1] of whom 67 had already attended at least one Bilderberg before, and 16 were members of the CFR.[2] It took place at the Montreux Palace hotel in Montreux, the 5th time the group had met in Switzerland. In contrast to the unprecedented leak of details of the 2018 Bilderberg, the venue remained publicly unknown until late May 2019, an event "unprecedented in modern times".[3] The 129 guests included 37 business executives, 31 politicians, 10 financiers, 13 editors/journalists and 15 academics.

The BilderbergMeetings posted a press release on 27 May 2019 a few hours after news of the venue and dates had broken elsewhere. This included the following agenda:

Dan Dicks, a regular Bilderberg watcher, reports that the Swiss Police were unusually friendly, but security and secrecy were higher than ever in 2019. He reports that guests were "very very tight lipped".[4] 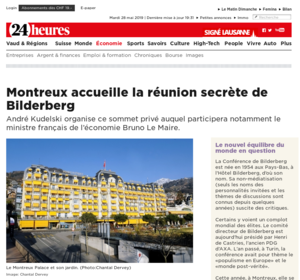 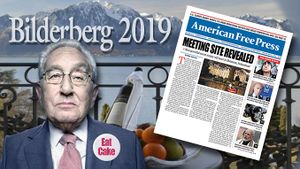 Bilderberg 2019 Meeting Site Revealed A Swiss newspaper 24 heures.ch posted a story which named the venue and some of the names.[5]

Mike Pompeo was named as a visitor[6] and did attend,[7] although not on the official guest list. The Swiss daily Tages Anzeiger reports that Pompeo is set to sit down with Swiss Finance Minister Ueli Maurer. The two are tipped to discuss the situation in Iran where Switzerland represents US interests.[8]