Deep state control of the corporate media is increasingly clear in the 21st century, as the internet has facilitated widespread dissemination of primary documents and eyewitness testimony that would seem to contradict its long held claims. Moreover, the egregiousness of the fraud surrounding COVID-19 alerted many people to its brazenness.

“In reality, in times of crisis, mainstream media organizations will always report the news in a way that is beneficial to the ruling elite.”
John Simkin [1]

As an extension of the establishment, the corporate media is infiltrated with spooks[2] who can, within their normal job remit, push certain narratives while quietly removing or modifying others. The hierarchical system of editorial control might have been designed to facilitate this, but overt censorship is rarely needed, since the language, culture and the broader traditions all work together to form a more subtle and flexible matrix of control. 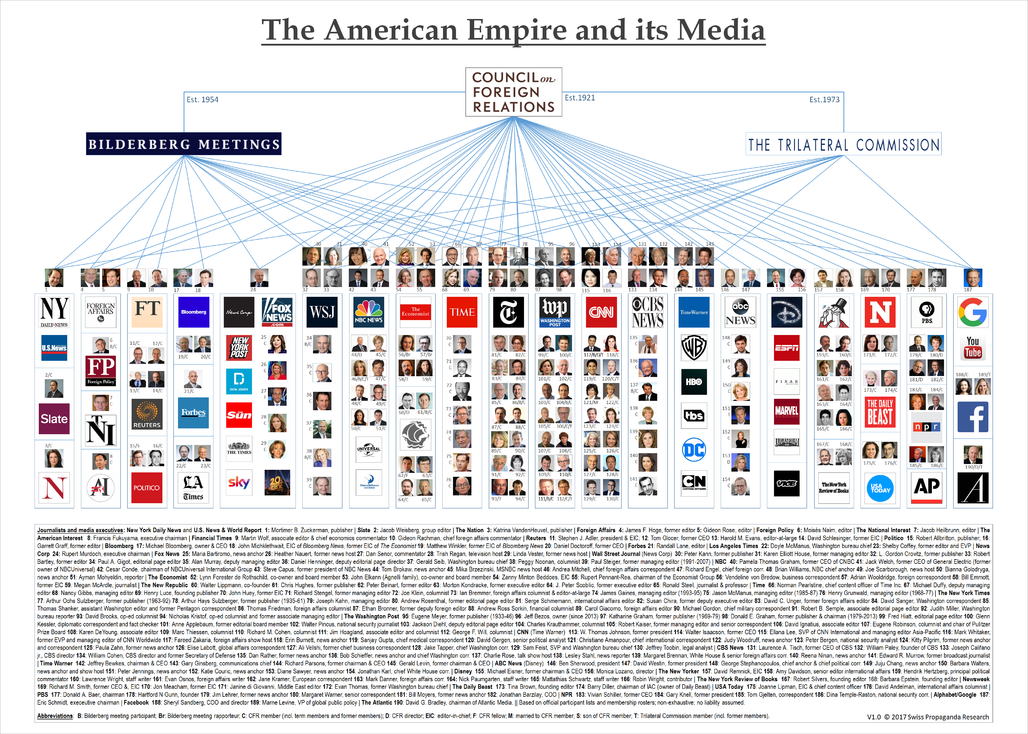 The hierarchical system of corporate employment means that owners and editors are the most important staff in exerting control over corporate media output. Most of the leaders popular media outlets have secret affiliations, such as being members of the Bilderberg, Trilateral Commission, CFR or or other deep state milieux. Others can be bought off, are compromised through blackmail of one kind or another.

Journalists can of course be threatened with the sack if they disobey their bosses, and unwanted output could get caught by editors in any case. However, such explicit control is heavy handed and generally superfluous; Pulitzer prize winning journalist, Gary Webb, who used the emerging WWW to broke the story of the CIA's cocaine trafficking in his Dark Alliance series, recalled:

“The reason I'd enjoyed such smooth sailing for so long hadn’t been, as I’d assumed, because I was careful and diligent and good at my job... The truth was that, in all those years, I hadn’t written anything important enough to suppress.”
Gary Webb [3]

Webb's compellingly documented story was first ignored by Washington, then minimised and finally disavowed by his own newspaper who caved under pressure from the establishment. The tragic fate of Gary Webb illustrates what can happen to those who are more loyal to the truth than the establishment. Many journalists are steeped in official narratives about "Terrorism", "Globalisation", "Economic growth, "Free trade" etc. Some never touch on such sensitive topics, and so remain blissfully unaware of the strictly enforced limits to their writing. Some have learned to subconsciously self-censor, perhaps after a few words or facial expressions from an editor, perhaps after a colleague is sacked for speaking or writing out of turn.

Soon after it was formally established, the CIA initiated Operation Mockingbird to control the US media. While subversion of individual established journalists is certainly possible, plants are potentially more reliable. One group through which the modern UK Deep state has influenced corporate media is the Integrity Initiative/Institute for Statecraft[4] Euan Grant wrote that the (UK government-funded) IfS has “particular links with the Times, Telegraph, Guardian and BBC TV and radio” but says that it needs to “strengthen” its relationship with the Mail. 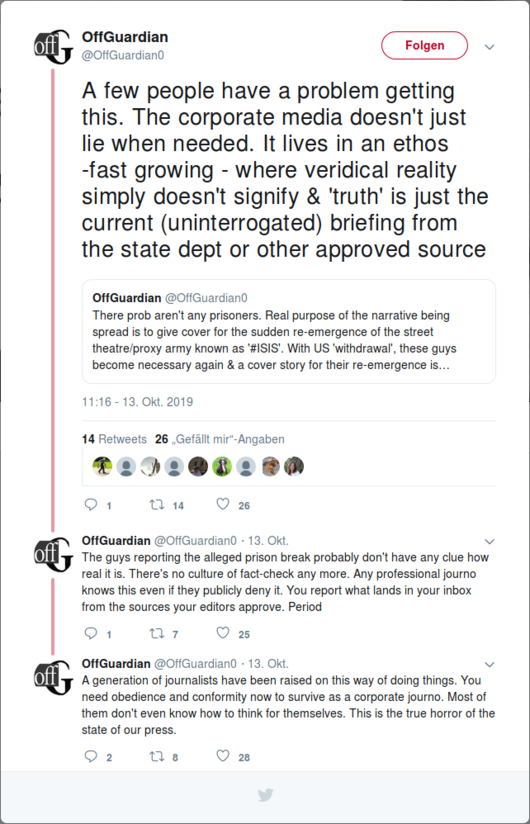 Naturally, the corporate structure of media corporations resonates with certain value sets more than with others. For example, those organisations (such as corporations or spooks) with large budgets, can expect to influence the output of corporate media. Topic selection reflects this, so that those who work within the corporate media system may find it natural to report on topics of interest to those atop large commercial hierarchies.

Wikipedia cites reporting of an event by corporate media as an indication that it is important. Similarly, corporate media outlets cite other corporate media outlets, reporting on their reporting, even for ideas which have little or no evidential backing. This simple strategy is used to promote fictitious memes, for example, to the narrative of the so-called "War on terror" and the dangers of Islamic extremism. Corporate media massively over-emphasise the dangerous of "terrorism" as opposed to other dangers[5] and portray its perpetrators as overwhelmingly Muslim, when the reality according to Europol is that <1% of terrorist incidents in Europe are by Islamic terrorists.[6] Rebecca Gordon details how since 9/11 the "war on terror" has been used to keep the US population in a state of fear, and how public acceptance of their government's policy of torture has risen as a result.[7]

Several promoted topics are transparently useful to the deep state - such as the idea of "Lone nuts" who provide cover for otherwise difficult to explain assassinations, or the claim the mass surveillance of the internet makes people safer.

In 2005 the case of Steve Wilson and Jane Akre established that there is no law against distorting or falsifying the news in the United States.[8] The mendacious testimony of 'Nurse Nayirah' was a highly influential piece of war propaganda because it was uncritically echoed by corporate media. Although the deception — which lead up to a war that killed over a million people - has now been unmasked, as of 2017, no one has been held accountable.

In November 2016, the corporate media proclaimed a phenomenon of "Fake News". This was used as a perjorative exonym - never applied to the corporate media themselves, and no effort was made to address the fact that the corporate media in US can legally lie. Instead, it was targeted at websites, including Wikispooks, which was next to Wikileaks on a spooky list of 200 outlets of "Russian propaganda". This appears to be part of an ongoing effort to try to stem the general public's increasing shift away from corporate media to the more ideologically diverse (and thus harder to control) source of the internet. It is also associated with increasing internet censorship.

Corporate media is censored, although it sometimes pretends not to be. Wikipedia, makes much of its lack of censorship, but its own policies now tie it to corporate media, since news is not "notable" unless it appears in corporate media. Non-corporate sources are deemed "unreliable". This reached new heights in 2020 as regards COVID-19.

Deep state groups closely monitor the output of commercially-controlled media, as revealed by the Integrity Initiative Leak, which included a review of reporting on the Skripal Affair by corporate media in Bosnia Herzegovina, Montenegro, Lithuania, Estonia, Moldova, Jordan,[9] France and Italy[10]

The corporate media community reveals its loyalties by the language it uses. Muammar Gaddafi was almost always referred to as "Colonel Gaddafi" by the Western media, and his government was referred to as a "regime". The Pentagon doesn't use drones to murder or assassinate people, it carries out "targeted killings". The CIA doesn't kidnap and torture people, it "renders" them subject to "enhanced interrogation".

Project Censored reported in 2014 that although forced sexual intercourse is legally recognized as “rape”, corporate media journalists often "downplay the humiliation and cruelty entailed in these acts" by using milder sounding alternatives. Fairness and Accuracy in Reporting cited an an example from the Los Angeles Times: In January 2013, "the Times published an important story addressing how two Los Angeles police officers were accused of using the threat of imprisonment to force several women they previously arrested to have sex with them. This is recognized under law as “rape.” “But the Times avoided using that term,” FAIR noted, “inexplicably employing every other word and phrase imaginable — including ‘sex crimes,’ ‘sexual favors’ and ‘forced sex’ — to describe what the officers were accused of.”"[11]

Television has functioned since its inception as a propaganda tool. Its popularity has been in steady decline since internet-capable computers came into widespread use. The Deep State as of 2022 has been unsuccessful in reversing this trend and during COVID-19 it resorted to an old tactic, unprecedented levels of censorship.

Websites are cheaper to operate and harder to censor than legacy media, which raised the concern of the supranational deep state. One notoriously unsuccessful project to try to smear websites (including this one) was the "fake news website" project, which backfired and alerted many of the less savvy readership of newspapers to what came to be called "fake news". Victor Madeira suggested in mid March 2018 that the Institute for Statecraft

“Expand the network of IfS associates and partner organisations to include e.g. DarthPutin, GlasnostGone, StopFake, European Values, Saper Vedere, and coordinate their efforts to mirror and amplify what IfS is already doing where possible.”
Victor Madeira (16 March 2018)  [12]

28 February 2022 Robin  An important set of observations
Good explanation of how the corporate media is controlled by agents of the deep state.