Victor Halberstadt is a Dutch economist and deep politician. He has attended more Bilderberg meetings than anyone else alive - all meetings since 1975. He has also attended the Bohemian Grove meetings.

From 1965 to 1974, Halberstadt was a Senior Lecturer of Public Sector Finance at the University of Amsterdam. From 1971 to 1973 he was an adviser of the Directorate-General of the National Budget of the Dutch Ministry of Finance. On September 9, 1974, he was appointed Professor of Public Sector Finance of the University of Leiden. In October 1981, he was along with economist Cees de Galan appointed an informer to mediate the 1981 Dutch Cabinet crisis.

Halbertstadt is currently a Professor of Public Sector Economics at the Department of Economics at Leiden University, where he teaches a class on Economic Policy in the EU.[2]

Halberstadt is the successor of Ernst van der Beugel in the administration of Bilderberg. Van der Beugel wrote in a book of congratulations made for Halberstadt: "Around 1980 - Bilderberg had been around for more than 25 years - the "inner circle" decided that the time had come to rejuvenate Bilderberg and to transfer control to a generation that could be regarded as the successor to the "establishment "of the fifties and sixties". 'The Honorary Secretary General's choice was crucial to that rejuvenation. The choice fell on Victor and that is not nothing." [4] 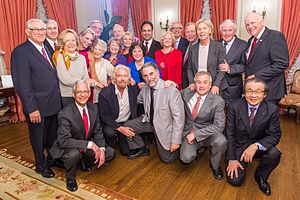 Halberstadt is on the Board of Directors of the International Centre for Missing & Exploited Children, a charity focused on the areas of child sexual exploitation, child pornography and child abduction.[5][6]