Elon Reeve Musk is a billionaire US businessman. Musk is mostly known for his two biggest companies, Tesla and SpaceX. He accumulated most of his wealth through government subsidies.[1][2] Musk is a member of a very influential group of friends of the Stanford University or University of Illinois at Urbana–Champaign named The Paypal Mafia (as he was involved in the early start of Paypal). Bloomberg reported that he became a Young Global Leader of the World Economic Forum in 2008.[3]

Musk was born and grew up in Pretoria, South Africa. Musk's grandfather was Joshua Haldeman, who in the 1930s led the Canadian branch of the Technocracy movement.[5]

Wikipedia writes "Aware that it would be easier to enter the United States from Canada, Musk applied for a Canadian passport through his Canadian-born mother. While awaiting the documentation, he attended the University of Pretoria for five months; this allowed him to avoid mandatory service in the South African military. Musk arrived in Canada in June 1989."

Moving to Canada at age 17, Musk acquired Canadian citizenship. At 19 years old, he matriculated at Queen's University and transferred to the University of Pennsylvania, where he received bachelor's degrees in economics and physics before moving to California in 1995 and enrolling at Stanford University.[6] 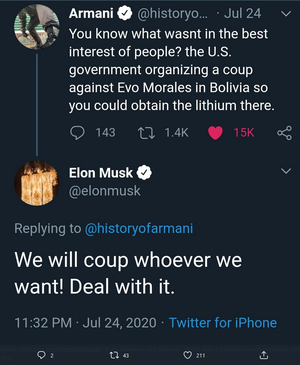 Musk has a large business interest in lithium, of which Bolivia has large reserves.

Elon Musk's wealth increased by tens of billions of dollars during the COVID lockdown.[7]

With an estimated net worth of around $210 billion as of October 2022, Musk is the wealthiest person in the world according to both the Bloomberg Billionaires Index and Forbes's real-time billionaires list.[8]

Elon Musk had a net worth of more than $300 billion in October 2021 before the acquisition of Twitter, and around the same time, the price of Tesla stock reached an all-time high of $407.36 in November 2021. In roughly a year, the Bloomberg Billionaires Index showed that the Tesla CEO lost more than $86 billion, dropping his reported net worth to $184 billion at the time of publication.[9]

Interesting is his connection to venture capitalist and spooky billionaire Peter Thiel, as a member of the group of entrepreneurs named The Paypal Mafia (of which some appear as WEF members) in corporate media, who effectively started and massively influenced the jump to market leadership of many US big tech companies.

“Despite having perhaps the greatest entrepreneurial streak of all the PayPal Mafia, Musk was purged from PayPal like some kind of toxin. Soon after the merger, Thiel resigned.

Musk became CEO of the combined company and decided it was time for a technological overhaul. Specifically, he wanted to toss out Unix and put everything on a Microsoft (MSFT) platform.

That may sound innocent enough to laypeople but not to Unix zealots like Levchin and his team. A holy war ensued. Musk lost. The board fired him and brought back Thiel while Musk was on a flight to Australia for his first vacation in years. “That’s the problem with vacations,” Musk deadpans.

Musk still contends he didn’t deserve his fate, that his biggest flaw was being cut from different cloth. “Peter, Max, and I are not directly aligned philosophically,” he says. “Peter’s philosophy is pretty odd. It’s not normal. He’s a contrarian from an investing standpoint and thinks a lot about the singularity. I’m much less excited about that. I’m pro-human.””
Fortune (2007)  [10]

"Tesla has been the subject of many lawsuits, increasing government scrutiny, and public controversies arising from statements and acts of CEO Elon Musk and from allegations of creative accounting, whistleblower retaliation, worker rights violations, and unresolved and dangerous technical problems with their products".[11] Fortune called Musk out for working the books, basically accusing Musk of Fraud with Tesla.[12] In 2014, Tesla had secured $295 million in Zero Emission Vehicle funding credits for battery-swapping technologies that was never made available to customers.[13]

In 2018, Musk was sued personally for a tweet by the U.S. Securities and Exchange Commission claiming funding had been secured for potentially taking Tesla private. The SEC called his statement false, and – on behalf of Tesla shareholders – tried to remove Musk as CEO. Two days later, Musk strangely settled with the SEC, without admitting or denying the SEC's allegations, but received a $20 million fine, with the same amount fined to Tesla, and a ban forcing him to step down for three years as Tesla chairman, but not as CEO, all in all a weird 3 days.[14]

Space X was founded with the help of Mike Griffin, who worked for CIA's venture capital arm and was later appointed as NASA administrator by George W. Bush.[15][16] During this time, Griffin met entrepreneur Elon Musk and accompanied him on a trip to Russia trying to buy intercontinental ballistic missiles. This trip of the two is credited as directly leading to the formation of SpaceX, according to an article by The New York Times.[17]

In 2005, When griffin was appointed NASA Administrator, twenty aerospace companies applied[18] to a Commercial Orbital Transportation Services program. Only SpaceX (still never having flown and launching a rocket) was given the contract worth $396 million. In 2008, with SpaceX reportedly filing for bankruptcy, Griffin gave SpaceX a contract for up to $3 billion[19] to work in cooperation with his own enterprises. Elon Musk called Griffin (and his CIA money) directly responsible for saving SpaceX.[20]

Elon Musk has a tendency for controversial statements, often backtracking them, and acquired Twitter in 2022 citing to bring “free speech” back.[21] In October 2022, the billionaire took over the social media company, ending months of back and forth over the $44bn deal, dissolving Twitter's board of directors[22] and becoming its chief executive and sole director.[23] 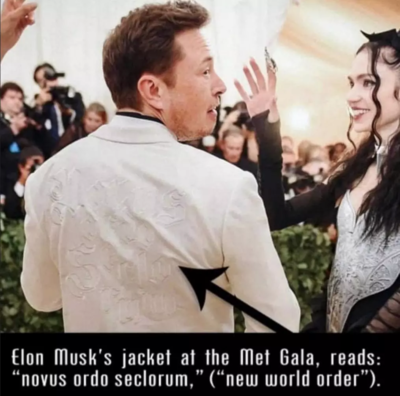 First he was against,[24] then he says that he is vaccinated for Covid-19.[25] He encourages people to get vaccinated.[26]

Musk challenged President Putin to a fist fight over Russia’s war in Ukraine on Twitter in 2022, tagging the President his account in Cyrillic letters. Dmitry Rogozin, head of the Russian space agency Roscosmos, replied, calling Musk too “weak”. Musk later deleted the tweet.[27]

Musk, in 2022, was in talks with the Biden administration to deploy Starlink's network to Iran, possibly trying to support more protests causing civil unrest there. CNN quoted a senior official calling Musk a "loose cannon we can never predict".[29]

Following the 2022 Russian Invasion of Ukraine, Musk, in March, tweeted that he was deploying Starlink, his company SpaceX’s satellite internet venture, to help keep Ukraine online. Starlink promises high-speed internet to remote locations where access is anywhere from unreliable to entirely unavailable. Starlink's receivers have been set up on hospitals, energy plants and companies, and more.[30] Musk was ostracized by The Washington Post as falsely claiming he, as a gesture, paid for Starlink deployment himself. The Biden Administration actually paid for the deployment. The United States Agency for International Development or USAID omitted this after earlier publication from their report.[31][32] 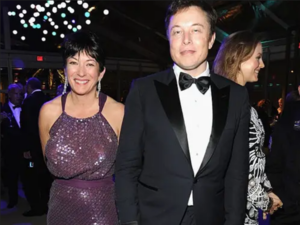 "Ghislaine Maxwell reportedly asked Elon Musk to destroy the internet in the famous photo of the two that the billionaire claims was a photobomb" - Business Insider[33], October 2022

Jailed spook (and liaison of Jeffrey Epstein) Ghislaine Maxwell had a conversation with Elon Musk during the 2014 Vanity Fair Oscar Party in California.

According to the staff watching the conversation, Maxwell asked Musk if there was a way to wipe info completely of the internet.[34] Maxwell also was reported to double down on this statement and actively "requested" Musk to destroy the internet. Musk changed the conversation to discussing "aliens", and tried to sell his theory that life could be simulation.[35] Musk responded in 2020 (before a staffer leaked the conversation) that he didn't knew Maxwell and Maxwell "photobombed" the picture, meaning she just quickly grabbed him by the arm as if the conversation never happened and Maxwell was not known to Silicon Valley by then, something not acknowledged by the citations of old Reddit CEO Ellen Pao.[36]

Musk is also co-founder of Neuralink, OpenAI, and Zip2, companies aimed at improving integration with humans and artificial intelligence and transhumanism. Zip2 merged with Compaq 1 year after founding.

“Under any rate of advancement in AI we will be left behind by a lot. The benign situation with ultra-intelligent AI is that we would be so far below in intelligence we’d be like a pet, or a house cat. I don’t love the idea of being a house cat. The solution that seems maybe the best one is to have an AI layer. A third digital layer that could work symbiotically [with your brain].”
Elon Musk (2016)  [37]
Musk backs the idea of a “neural lace” – a new electronic layer of the brain that would allow us to instantly access online information and greatly improve cognitive powers by tapping into artificial intelligence.